Stetson’s New Faculty Program kicks off in August with New Faculty Orientation which introduces new full-time and adjunct faculty to academic life and culture as they embark on their work as Stetson teacher-scholars. 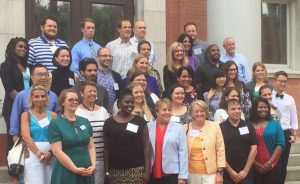 Join thousands of faculty across the U.S. as they exchange worldwide ideas  during International Education Week, November 17-21, 2014. More

A limited number of mini-grants, for up to $500 each, are available for Stetson’s Scholarly Writing Circles.
Proposal submission deadline: January 15, 2015
For more information, click here.

“I’m a child of quiet” is what Kevin Quashie said during this interview, where I first heard him discuss his book, The Sovereignty of Quiet: Beyond Resistance in Black Culture.  And so it was with some trepidation that we invited him to spend two days with hundreds of Stetson students and faculty members at both the DeLand campus and College of Law.

In conversation, Kevin’s gentle and disarming affect drew many of us beyond the scholarly, into the personal.  Audience members at the keynote leaned forward, as if they were hearing the voice of an old friend, rather than the address of a lecturer.  And many of those in attendance were, I think, touched by Kevin’s reminders that we are all bearers of an inner life that remains profoundly resistant to publicly-assessable expectations and stereotypes.

inner life” he writes, “is not apolitical or without social value, but neither is it determined entirely by publicness.  In fact, the interior—dynamic and ravishing—is a stay against the dominance of the social world; it has its own sovereignty”.

Dr. Quashie’s visit embodied what we hoped the Social Justice Lecture Series would accomplish—it jarred us into revaluation. But in his case it managed to do so through the potency of quiet.

Rust conducts research in the areas of social ontology and experimental philosophy.  Most recently, he has been developing an account of the charismatic relationship in terms of what Weber calls “absolute trust”.

Dr. Rust earned a Ph.D. in philosophy from the University of California at Riverside.  Outside of the office and classroom, he enjoys spending time with his wife, Kim, and two young children.

Boost your scholarly writing projects!!
All writers at any stage of writing welcome.

Bring your Critical Thinking Wheel, your selected learning outcomes, an activity (one that’s giving you trouble, an activity you’d like to try, etc.) …and bring a colleague.

The staff of WORLD: The Rinker International Learning Center cordially invites you to Faculty Open House at WORLD.