During this Lunch & Learn, faculty and staff will offer tips, insight, and ideas on how to plan and execute a study abroad opportunity for Stetson students. Faculty who have successfully conducted study abroad experiences will share lessons learned. The deadline for proposing a study abroad course or program is September 15, 2018. Come and learn how we can help you! Lunch is provided and space is limited. 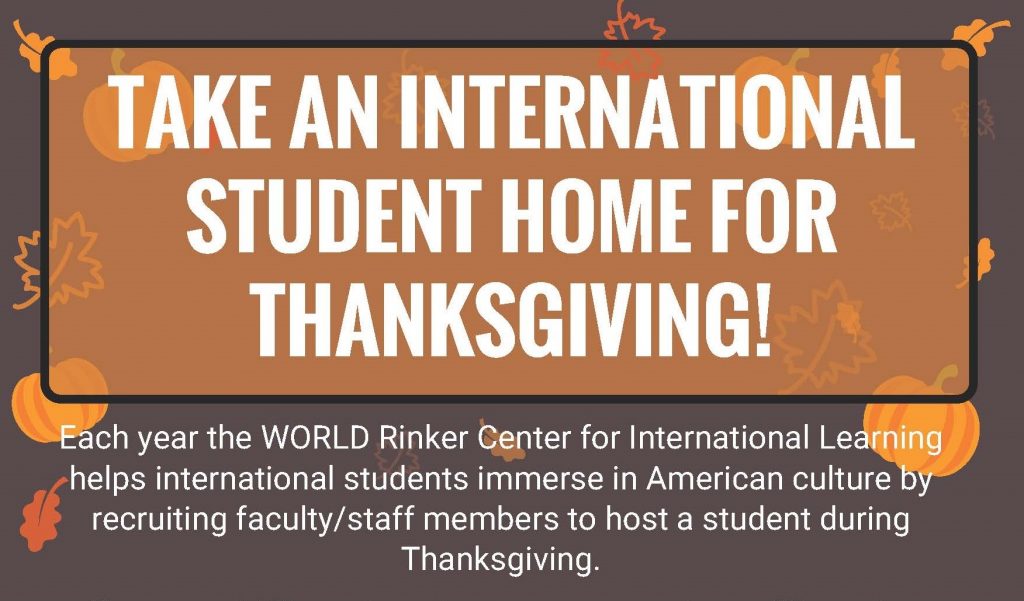 Fall season is finally here and Stetson University is seeking host families to Share Thanksgiving with international students. Sharing Thanksgiving is one of the most impactful experiences communicated by international students. In one day, students learn a great deal about different aspects of American family life and often develop long-lasting relationships with you, their host. 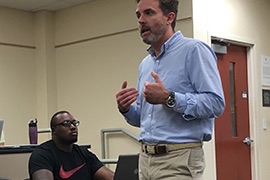 Stetson Visiting Lecturer Lou Paris talks to students in his class in the Stetson School of Business Administration.

“It’s hard these days to distinguish between business and international business,” he said, drawing on his many years of living abroad, first as a child in his native Venezuela and later in Canada, the United States and Europe.

But while large businesses and corporations are becoming more inclusionary, he pointed out that distinct cultural differences still exist between countries that are reflected in the dress, food, music, attitudes and lifestyles of the people.

“Every country is ethnocentric to some degree. You hold your culture to be superior, no matter how large or small the country is,” he told a class that included students from China, Sweden and Germany, although most were Americans. “I challenge you to go outside your comfort zone.”

Paris, now a U.S. citizen, has practiced what he preaches as an entrepreneur and visiting lecturer in Stetson’s School of Business Administration, where he graduated in 2001 and received an M.B.A. in 2007.

In recent years, he developed a website, called Konkeros.com, that places international students in jobs with U.S. companies (Stetson University was the first implementer of this technology). He also heads an International Students Club at Stetson that usually meets once or twice a month to discuss all aspects of living and working in America. Business leaders often are invited to speak to the group.

Now, Stetson has developed a plan to build on his efforts and provide more help for international students to start careers in a competitive global market. 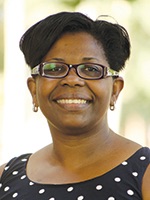 “Lou identified a demand by our international students and unselfishly volunteered his time and talent to this important work,” said Rosalie Richards, Ph.D., associate provost for Faculty Development. “As a result, he has inspired the University to formalize his efforts. We have developed a comprehensive plan to boost international student engagement, talent development, and career success and thus, provide an excellent return on investment for these students and their families.”

When Stetson’s plan is fully funded, she said, it will provide a full-time advocate who will continue to develop relationships with potential employers.

“The program will include internship support and the continued use of Konkeros.com will be a strong component. We also anticipate sharing what we learn because at Stetson, what’s good for international students is good for all students,” Richards added.

STUDENTS FROM 55 COUNTRIES
Last year, 185 undergraduate students at Stetson came from outside the United States, making up 6 percent of the student body. They were from 55 countries, according to Stetson’s Office of Institutional Research.

Paris said many of them major in International Business.

“They all know I was an international student,” he said. “Their questions can range from, ‘What do I do with a speeding ticket to I need a job to stay in the U.S.?’ ”

And that one question led to the idea of developing the website listing “tens of thousands” of employers, so foreign students could connect with companies that hire graduates with diverse cultural backgrounds.

“I asked the students what they needed to (find) a job. Their most common wish was to know what companies were hiring international students. So I didn’t waste time. I built a database,” he said. “I created something that no one else does by ranking companies by the best to least likely to hire students in the fields they majored in.”

Traditional job fairs were intimidating for some students, he said. One Venezuelan student broke down crying in Paris’ office, after she was unable to make even the most basic connection.

“I was very upset. She was so bright, but got no chance. I thought there was a need to help navigate the madness,” Paris said. “That was the catalyst for the site.”

SAVING STUDENTS TIME
Lucas Diniz, 24, graduated from Stetson last May with a degree in finance. Thanks to the Konkeros website and Paris, he quickly found a job at Product Quest Manufacturing in Daytona Beach. He’s a market research analyst working mainly on over-the-counter generic brands for stores like CVS.

“It saved time by narrowing down the companies that actually hire international students. When you just look for a job on your own, there can be a lot of wasted energy, where you go out on interviews only to hear they don’t hire international students,” Diniz said. “Lou (Paris) and Konkeros helped me select jobs where there was the most probability of getting hired.”

Paris said international students often feel like underdogs with no family or friends in the area to lean on for support. But on the flip side, that often builds character.

“They are tested more at a younger age in the ways of the world. They are more mature. They want to stay for the opportunities, or because their country is in shambles like in Venezuela, or they simply like the American way of life,” said Paris, whose father had owned a construction company in Venezuela when he was growing up.

Paris said he expects other colleges throughout the state and country in the near future to offer Konkeros as word spreads of its success.

“My goal is to get this in the hands of all international students in the United States. That would be incredible,” he said. “It’s the foundation for colleges to build upon. It can help them with admissions, attracting more international students by showing them that they can achieve their goals, and stay and work in the U.S.” 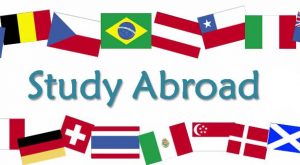 Faculty Insight: Faculty participants each discussed their preliminary ideas for potential study abroad programs. Dr. Phillip Lucas kicked off the discussion by describing his experience designing his upcoming faculty-led study abroad program in Camino de Santiago, Spain. He provided his background in religious studies and pilgrimages and explained the process of being nominated for a WORLD Class Travel Award to participate in a CIEE International Faculty Development Seminar on the Camino de Santiago pilgrimage.  This experience laid the ground work for preparing him to work with CIEE and WORLD to develop a Faculty-Led Study Abroad program for students.  Lucas explained that by working with CIEE and WORLD on the logistics of the program, he was free to concentrate on the integrity of the academic program. He also described his experience recruiting students for the program and strongly recommended that new faculty work with an international provider to develop their programs.

How to Develop New Programs:  Brent Spencer, international learning program coordinator at WORLD, led a discussion on the Nuts and Bolts of developing a new faculty-led study abroad program.  Most participants at the lunch & learn were new to study abroad program development.  A robust discussion with questions and answers followed including conversation on how to find good providers for program logistics, different models for structuring faculty-led study abroad, timeline and steps for developing a new program, risk management, how to find financing to keep programs affordable for students, student scholarship resources, and resources WORLD provides for faculty and students throughout the process.

Participants were encouraged to make an appointment to meet with Brent Spencer to discuss their specific ideas for programs for next year.

“…so I called to see what my Sprint International calling plan allowed in Moldova?”
“Of course, sir… and what country is Moldova in?”

I called my credit card company to ensure that they would not block charges made from this tiny former Soviet republic nestled just below the Ukraine and above Romania, and they did no better. They had never heard of Moldova.  To be honest, even as the founder of our International Business major, I could not have placed it on a map. If Moldova is lost on the Western world, why would it be of any consequence to Stetson?  See if you can answer the question from the story below.

Through a web of contacts including Peace Corp workers, Moldova’s Canadian ambassador, and on-the-ground NGO workers, I had received an invitation to teach a course entitled “Doing Business with the West” at their leading business school, Moldovan Academy of Economic Sciences in the capital, Chisinau. 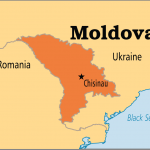 Dropped off from its Soviet parent in 1991 like an abandoned child, Moldova entered statehood with virtually no political, legal or economic institutions intact, and has since struggled through the torturous process of state-building with the usual menu of calamities: protests, bloodshed, Russian incursion, emigration, massive corruption and predatory economic practices. The population dropped by about 25% to 3 million.  If Moldova was known to the West at all, it was
known for human trafficking and cyber-hacking.  Can we dare to believe we could make an impact?

My expectation was to find a country of scowling, downward-facing, broken souls intermingled with high- and low-tech thugs. What I found was a flower growing in a scorched place.  My class of 51 students, who spoke excellent English, were eager for change. They conveyed a palpable thirst for both hope (“Could things really be different?”) and technique (How?).  They were utterly exhausted from corrupt government and business.  I presented to a rapt audience some recent research I had conducted in Colombia about how a major city defeated endemic corruption in just 8 years. You could almost see hope being rekindled.

Yet beating corruption also means providing civil services and building institutions, which require a modern and educated technocracy.  It’s requires more than just moral indignation. Moreover, Moldova is the fault line between Russian and European cultures. Russian and Romanian languages are both spoken – yet they are vastly different, not even sharing the same alphabet. Post-Soviet atheism clashes with a revived Orthodox church.  In Moldova’s effort to embrace the West, Russia, their largest trading partner, embargoed Moldova’s exports exacerbating an economic crisis.  My graduate Business Strategy class spent this past fall semester building a US market entry plan for a large Moldovan winery. I presented the plan to the owners while there; they expressed deep appreciation and anticipated pursuing the recommendations. Could these students have contributed at least a modicum to a better future for some Moldovans?

Moldova is of consequence to Stetson precisely because a window for change is open, and humans matter.  We – faculty and students – can influence the outcome for good.  We can live our values of global engagement and personal growth while learning lessons of courage and perseverance from the Moldovans. Contact me if you have an interest in a return visit!    Seriously!  wandrews@stetson.edu 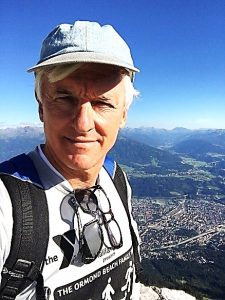 William Andrews, Ph.D., pictured left at Stetson’s Summer Innsbruck Program, is a graduate of the Thunderbird School of Global Management (M.I.M.), and the University of Georgia (Ph.D. Business Strategy). He is associate professor of management  at Stetson University and a certified management accountant with the Institute for Management Accountants.

Dr. Andrews’ academic interests include business strategy and international political economy.  He is actively involved in the Central Florida venture capital/start-up community and board-level NGO consulting. For fun, he competes in triathlons and writes short stories and novels.

Dr. Andrews gratefully acknowledges support from the Stetson School of Business Administration and a WORLD Class Travel Award from WORLD: The David and Leighan  Center for International Learning at Stetson University.

The staff at WORLD: The David and Leighan Rinker Center for International Learning cordially invites you to Faculty Open House @ WORLD.