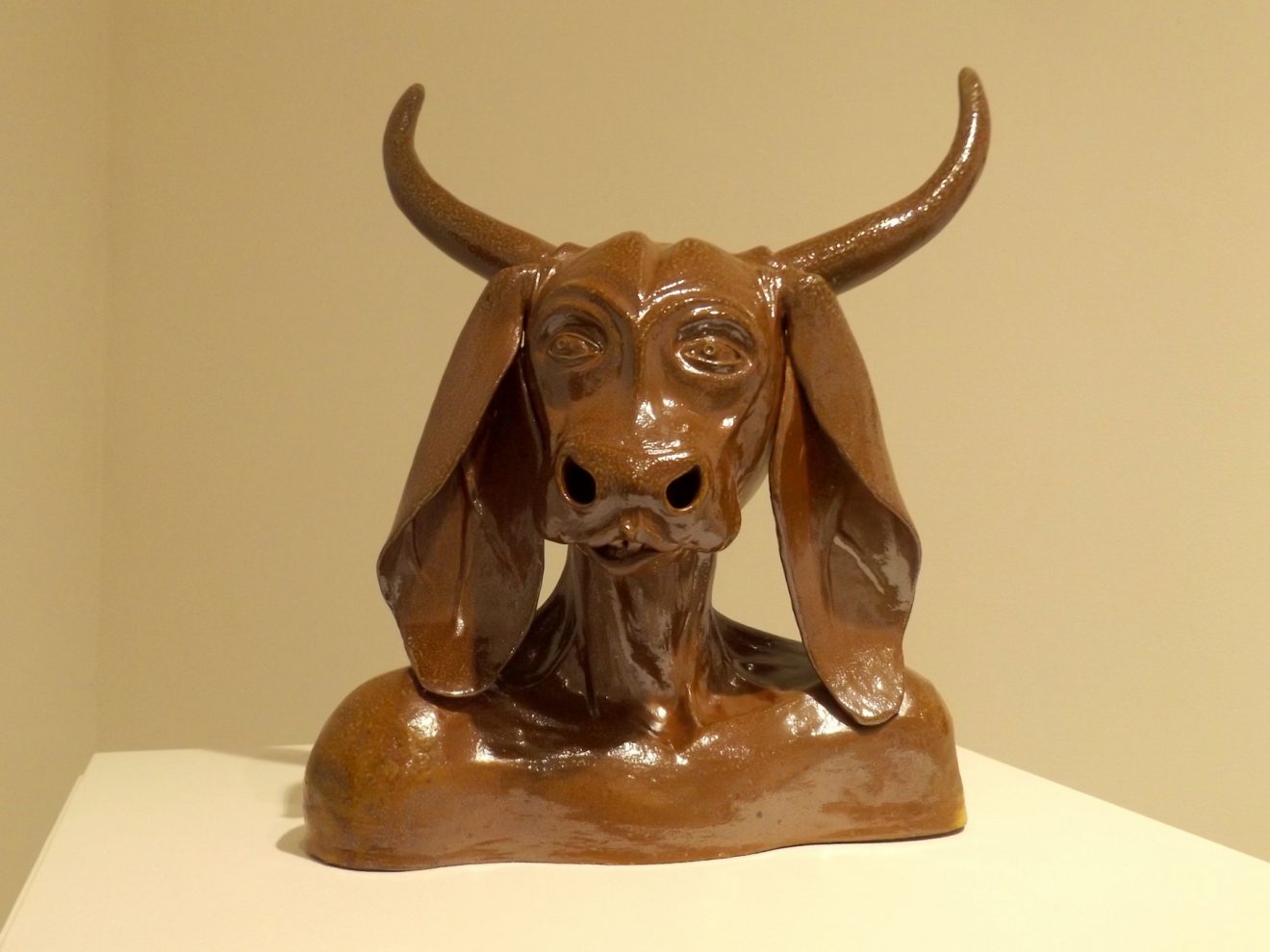 The exhibition runs through Dec. 7 at the Hand Art Center on Stetson’s DeLand campus. Sixty-two student artists submitted 129 works to be considered for the show.

All Stetson students regardless of major were eligible to participate in the exhibition. This year’s show includes works by 16 non-art majors.

Gilmour, a junior with a double major in psychology and studio, currently is in Thailand as part of an exchange program. 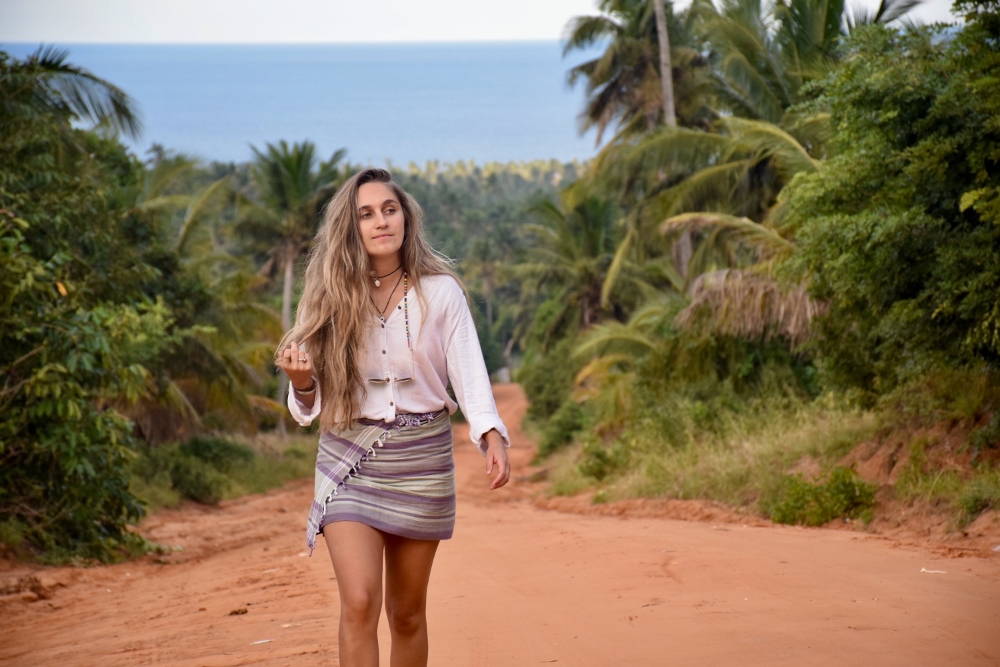 By email, she said she “just thought it would be cool” if Greenshields titled the ceramic “because she went to the effort of entering it for me on my behalf. When Nat told me what she had called it, I burst out laughing. I told her it definitely wouldn’t win anything now with a name like that, but I guess I was wrong.”

A fifth-generation native of Zimbabwe, Gilmour noted her family, who still lives there, breeds Brahman bulls. “I’ve grown up around these floppy-eared cows my whole life, so I guess that was my inspiration for the piece,” she said.

Gilmour said there “are not a lot of higher education options in Zimbabwe” and she chose Stetson because of Florida’s warm climate “and I liked how small Stetson is and how much history it has.”

Her main mediums are oils and ceramics, but she had never worked in the latter until she took a class under Professor Dan Gunderson in her first year.

“I had to beg them to let me into the class because it was already full, and I took the class without much intention of pursuing ceramics,” Gilmour said. “But I fell in love with the medium and loved working with Dan.”

Gilmour is uncertain which of her degrees she will pursue as a career path.

“I get bored easily so I’m sure I’ll chop and change careers,” she said. “It’s good I have two very different degrees to follow. I’ll definitely carry on making art throughout my life – I’m just not sure if it will be professionally or just as a hobby. Life is too fleeting to have a set plan, things change all the time and therefore so will I.”

If you Go:
The 29th Annual Undergraduate Juried Exhibition runs through Dec. 7 at the Hand Art Center on Stetson’s Palm Court/Quad, 139 E. Michigan Ave., DeLand. Admission is free and open to the public. Designated parking is available in the lots at East Arizona Avenue.

Story is an adapted excerpt from an article originally posted on November 28, 2018  at Stetson Today Cuenca, the capital of the Azuay province and third largest city in Ecuador, is the economic center of the southern Sierra. With its 8,000-foot elevation, cobblestone streets, cathedrals and colonial parks, Cuenca is perhaps the country’s most charming city. And, not coincidentally, Cuenca recently has enjoyed resurgence as a safe, low-cost and generally pleasant locale for expatriates to rediscover and for retirees to live.

At Stetson, Cuenca also represents an opportunity for students to travel abroad, using this natural wonderland, believed to have been founded around 500 A.D., as their own classroom.

The next lessons are scheduled for June 1-30, 2019, when up to 10 students will gain a “total immersion experience,” according to Bill Nylen, Ph.D., professor of political science, who will serve as faculty mentor.

“That part of the world is absolutely fascinating,” Nylen said. “I live for cultural immersion. … I’m really excited about this trip for all kinds of reasons.”

Among the planned sites to visit with the students are churches, parks and museums, along with indigenous communities and the picturesque countryside, where all four of southern Ecuador’s distinct cultures (Hispanic, Cañari, Saraguro and Cholo) will be on full display. For students, also included in the trip is a mandatory Spanish class plus optional instruction, with the study falling under a four-credit course. Each student will be hosted by a family. The cost, excluding airfare, is roughly $3,000 (including meals and room/board).

The response from students who traveled to Cuenca last summer?

Noah Katz, a senior history major, went on and on about his experience, which even entailed attending a church mass with his host family (all in Spanish) and a wedding — both “unofficial” adventures. He concluded that the trip “exceeded expectations” before exclaiming, “I had a wonderful time!” For good measure, Katz added that he remains in touch with his host family.

On the upcoming trip, Nylen will replace Bob Sitler, Ph.D., Latin American and Latino Studies Program director and professor of world languages and cultures. One of the reasons is that Sitler is planning 12 days in Yucatan, Mexico, Dec. 28-Jan. 8, with four students.

There, subjects will range from seven ancient ruins and eight natural landscapes to nine Mayan villages. In preparation, this fall the four students are taking a classroom course — mostly taught at Sitler’s home — then returning for a post-trip spring course that will encompass project and presentation work.

“This is about seeing, feeling, smelling. And most students respond very well to that,” Sitler commented.

Their study abroad is part of a concerted effort by faculty, as well as a curriculum requirement, through Stetson’s Latin American and Latino Studies, a multidisciplinary and experientially oriented program that encompasses social, cultural, political and economic systems of regions. Students, who receive a minor, must complete at least one experientially oriented credit-bearing course as part of their academic requirements. This may include a Mentored Field Experience, study abroad in Latin America and/or approved internships.

In the past, students have studied in Guatemala, Peru, Mexico, Belize, Argentina, Brazil, Uruguay, Ecuador and Puerto Rico.

And, with Spanish being the most studied language on campus, the program is especially popular across a campus that clearly is bullish on study abroad. In all, 24 study abroad trips, the most ever at Stetson, have been proposed for 2018-2019, according to Wendy Viggiano, program coordinator of International Learning.

Notably, the Mentored Field Experience is a program sponsored by the Latin American and Latino Studies department that began in 1995, fully funded by alumnus Mark Hollis ’56, a university former trustee. The program covers the expenses of up to four students each summer on professor-led trips to South America, Central America, Mexico and the Caribbean. Before visiting a country, the students must spend the spring semester in the classroom, preparing for the trip by learning the history, politics and culture of the nation, as well as submitting a research proposal. During the trip, the students collect data for those projects, culminating with a fall-semester, post-travel evaluation course and presentation of their research at Stetson.

Essentially, students travel the world and learn by doing, one real lesson at a time.

Said Sitler: “This is the opposite of staying in an envelope.”

-Published at Stetson Today on November 26, 2018 by Michael Candelaria

International experience used to be a “nice-to-have” criterion in a graduate’s resume. Today, it has become one of the most important components of a 21st century education. Many new studies show a direct impact of study abroad on creativity, cognitive ability, and student success. In addition, studies show that study abroad plays an important role in developing a global mindset and skills necessary to succeed in the workforce. Below are studies showing the value employers place on international experience and whether a graduate’s career prospects actually improve as a result of this experience.

The Erasmus Impact Study: Effects of Mobility on the Skills and Employability of Students and the Internationalisation of Higher Education Institutions
This independent study prepared for the European Commission finds that internationally mobile students have better chances of finding a job after graduation. Their unemployment rate five years after graduation is lower than non-mobile students. Results show that around 65 percent of employers consider international experience important for recruitment, and over 90 percent are looking for transversal skills enhanced by study abroad, such as openness and curiosity about new challenges, problem-solving, and decision-making skills.

Gone International: Mobile Students and Their Outcomes; Report on the 2012/13 Graduating Cohort
This UK Higher Education International Unit report finds that graduates who had studied, worked, or volunteered abroad were more likely to be employed within six months of graduation. The data also shows a significantly lower proportion of graduates from disadvantaged backgrounds who were mobile were unemployed compared with those from the same backgrounds who were not mobile. Graduates with international study experience earned more, on average, than other graduates.

Expanding Opportunity by Opening Your Mind: Multicultural Engagement Predicts Job Offers Through Longitudinal Increases in Integrative Complexity. Social Psychological and Personality Science, 5(5), 608-615
This study by Maddux et al. shows that the extent to which students adapted to and learned about new cultures (multicultural engagement) during a highly international 10-month master of business administration program predicted the number of job offers students received after the program, even when controlling for important personality and demographic variables.

GLOSSARI – Georgia Learning Outcomes of Students Studying Abroad Research
An assessment by the University System of Georgia found that students who studied abroad had a 17.8-percent higher 4-year graduation rate than those who did not study abroad, particularly among underrepresented minority and low income students.

How Employers Value an International Study Experience
Based on responses from 10,000 recruiters worldwide, this QS Global Employer Report found that employers are looking for the skills and experience gained through the overseas study experience when hiring graduates.

This post was originally published in the fall 2015 edition of IIENetworker magazine, “The Impact of International Education.” This issue analyzes distinct aims of international education and discusses ways to improve how we measure its success.

WORLD: Rinker Center for International Learning joins thousands of universities, colleges and organizations to recognize international learning and global mindset. During November 5-9, 2018, Stetson will celebrate its global footprint with a week of cultural activities, research showcases, sporting events, and more. 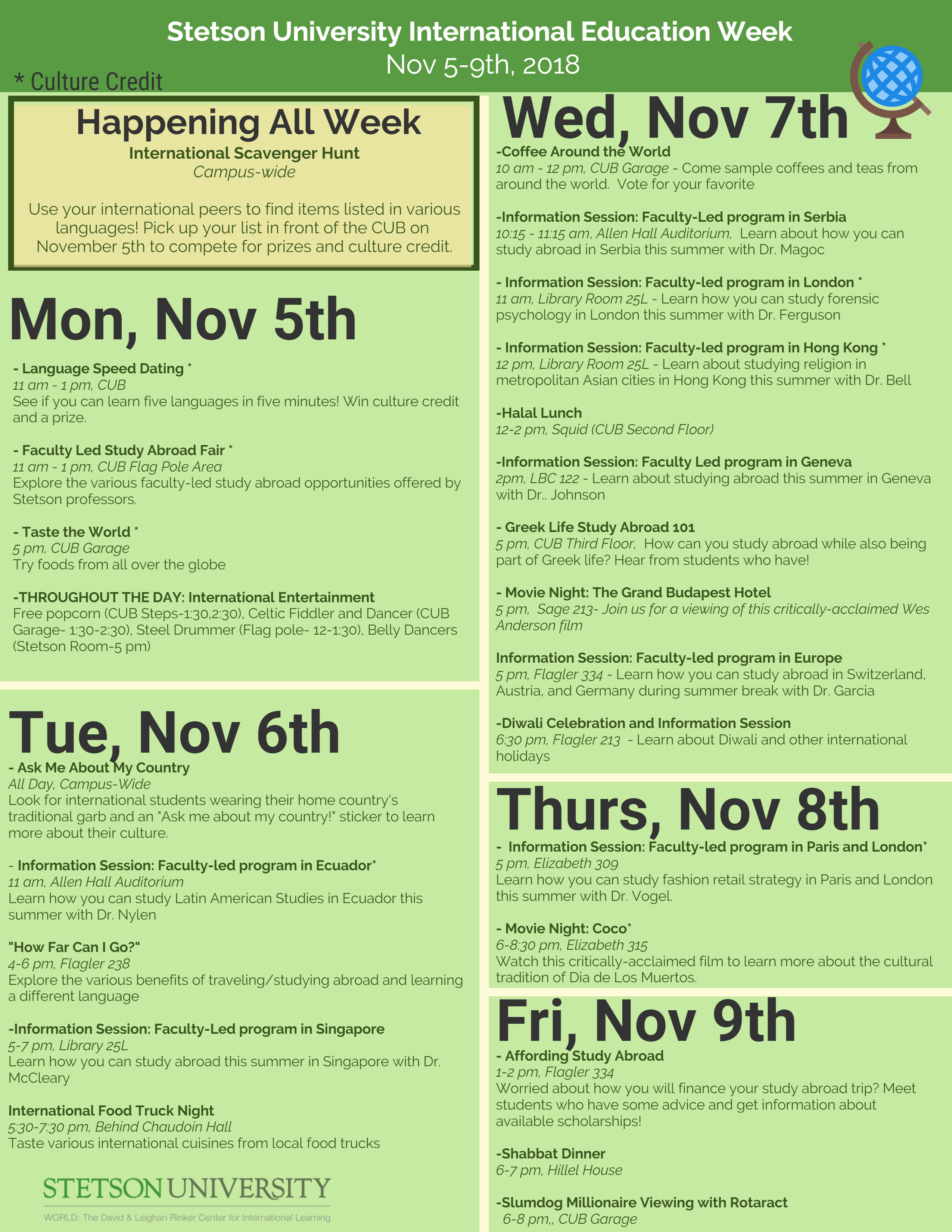 International Education Week is November 12-16, 2018. IEW is a joint initiative of the U.S. Department of State and U.S. Department of Education “to promote programs that prepare Americans for a global environment and attract future leaders from abroad to study, learn, and exchange experiences”.